Flightless Birds of the Metazoic 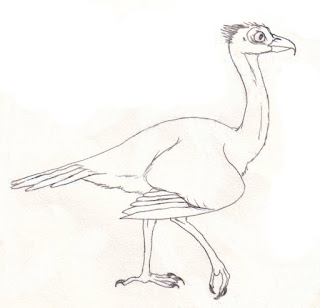 Ambulaquila
Descended from today's eagles. This bird
can certainly fly, but usually prefers not to.
It lives a life much like today's Secretary
birds. They find all their prey at ground
levels, and only use their wings to avoid
getting struck by venomous snakes, which
it loves to prey on. 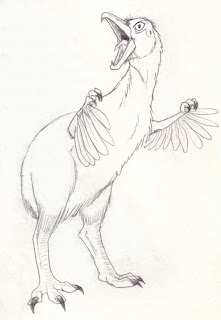 Arpazornis
The largest of the flightless predatory birds of the
Metazoic. The lifestyle parallels that of the prehistoric
terror birds. The finger tips, which is present in all
modern birds, have grown and developed claws. But
while the arms are still well feathered, they are useless
for flight. The bird it's self stands about 14-feet tall and
weighs about a ton and can run very fast to capture
other birds and smaller mammals. The beak is a
powerful weapon with bone-crushing power. Common
prey items for this bird are small ungulates, like the
smaller dromad antelopes, and other birds, such as
Trechocygnus. Sometimes they can take down the
smaller therapeds too. 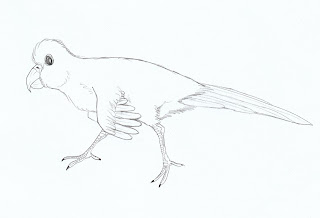 Apteropsittus
A flightless parrot of the Antarctic region.
This bird is more of a runner than anything
else, feeding on low-lying plants and
berries and sometimes carrion. The beak is
big and tough, capable of even crushing
bone. Though the wings are useless, the
legs are very powerful and allows this bird
to run very fast. Much like today's
roadrunners. 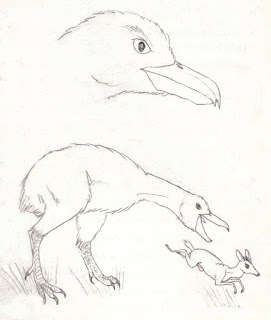 Diploacurostris
A very powerful bird that completely lost it's
wings. Instead, they have powerful legs and a
powerful beak. The beak has 2 very sharp
points on the tip, almost like teeth, that allows
them a better advantage at grabbing and holding
on to a struggling prey. Deer and antelope are
the primary victims. Though this 7-foot tall bird
is tough and well-armed, they themselves can
fall victim to Arpazornis or Deinognathus. They
are much faster than Arpazornis though and can
usually outrun them. 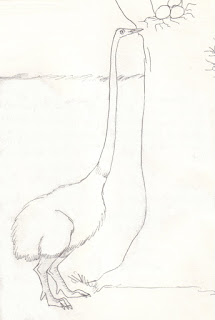 Laimarga
A giant relative of the rhea. Their lifestyle is
actually more like that of the cassowaries. Like
the cassowaries, these birds are lazy runners.
Instead, they are equipped with slashing claws on
the feet that act as offense against an attacker.
The eyesight is relatively poor and often this bird
attacks without provocation, kicking with their
feet or biting with their razor-sharp beak. When
not in attack mode, this is a rather peaceful bird,
feeding on fruit, leaves, berries, grass, seeds,
small vertebrates like lizards, and even can be
found feeding on carrion. The neck of this bird is
proportionately longer than in any other bird,
living or dead. The bird it's self stands about
17-feet tall. 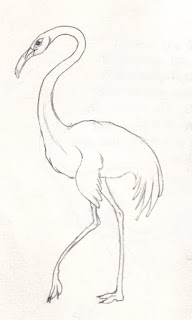 Lipoptes
A flightless flamingo. This bird stands about 5 feet
tall, and most of that height is leg and neck length.
They live in very large groups and this is mostly
their primary means of defense. Though they
cannot fly they are very good runners and jumpers.
The short wings act to help the bird swim, with the
feet acting as rudders. They are not very fast
swimmers, but they can swim well enough to
capture some small shrimp-like crustaceans and
escape from predators. The greatest predators are
mammals, particularly the Deinognathids and even
predatory bats like Cercomoloch. 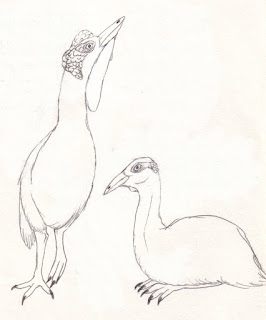 Pseudostruthio
This is a relative of today's guineafowl. They have
gotten considerably bigger. The males have an inflatable throat pouch that the hens find very attractive. This 4-foot tall bird nestles mostly in the tall grass on the African plains. Like their ancient relatives, these birds live in groups, and set off alarm calls when a predator is near that every animal in the vicinity reacts to. Mostly these birds scrape the ground for seeds and other small vegetation. 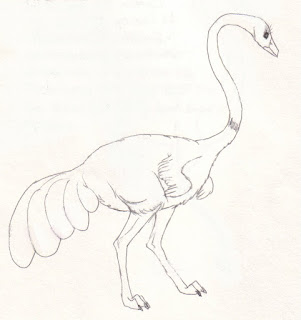 Trechocyngus
This is a Metazoic relative of the ducks and
swans. They still live and feed in the water
on what is known  as duckweed. However
they have developed powerful legs and live
the lives of aquatic ostriches. Most predatory
birds, like Arpazornis, will not chase their
prey in the water. When this bird is terrified,
it will run out into the center of a lake or
pond and submerge up to it's head in water.
The only predator that will follow it into the
water is Deinognathus. When this predator
attacks, these birds take their chances in
outrunning it. They can run up to 60 mph for
as long as necessary. The tail is held high
when running to confuse the predator and
the beak is sharp and can inflict some nasty
scratches on a predator that attacks it.