The Anteaters: Family of the Week

I have kept the modern family Myrmecophagidae for well into the future. They are descended from the modern family, only in the Metazoic, they are considerably more varied. I used Dixon's idea for a swimming anteater. Some on the SE forum thought that idea was silly, but I personally like it. We have colonies of ants that build their nests in swamps and lakes, like beavers. Or rather like water spiders. The feet of these ants are paddle-shaped, and the hills themselves are made of water reed material. The swimming anteaters paddle through the water like muskrats, and are able to rip these mounds apart with their sharp claws. The anteaters of this age completely lack the teeth, but most have developed gizzards, and Formiciarctos has weapons of it's own for crushing food. Most species walk on their knuckles like apes, and have sharp claws on the forelimbs. The tail is long, and in only one species is prehensile. The head in most species has not changed hardly since the Cenozoic. Except in the highly-advanced species Formiciarctos. Most feed on insects, but some of the larger species will also feed on carrion. The opening for the mouth is rather small, and only opens a little bit. The eyesight is good in most species, but the sense of smell is more advanced than that of most mammals during this era. They are active during the daylight hours.
The largest species in this family are the ant-bears under the genus Formiciarctos. Some of these species can get big enough to see inside a 4-story house (about 35-40 feet tall). These species do not only feed on insects, but also on carrion and some plant material. They have no teeth, but the palate has developed some highly sophisticated bony plates that are somewhat serrated for crushing matter. At the front of the mouth, these animals also have developed a sharp, flat shearing device that curves down at the tip. This structure is used for shearing meat off of the bones of carrion or clipping off plant matter and acts like incisors. They also have developed something of a gizzard, which they use as molars for grinding anything that goes into their bellies. The head of these species is heavier in build than those of modern anteaters, and more resembles that of a horse or a camel to accomodate these advanced features.
The smallest species are in the genus Virgultarctos, the jungle ant-bear. Unlike it's larger sister species, the jungle ant-bear feeds exclusively on ants and termites and resembles modern tamanduas. They are the only species in this family during the Metazoic that has a prehensile tail and lives in trees. The ants they feed on are the only species that has remained in the trees as well during the Metazoic. These ants, like modern mud wasps, build their nests using mud and mulch, which hardens into a cement-like form. Virgultarctos is equipped with sharp claws and the long, sticky tongue that is characteristic of the family today. They have no teeth or plates, like in Formiciarctos. They do however have a gizzard, which they constantly supply with pebbles to crush the swallowed ants with.
These animals can very effectively defend themselves with their sharp claws found on the forelimbs of all species. They don't hesitate to use these weapons. Their worst enemies are the Deinognathids, that are highly-skilled hunters that are even undeterred by these sharp claws. Carnodorcas is especially skilled at hunting down Formiciarctos, despite the fact the anteater is about 5 times the size of the predator. Carnivorous rats can also pose a threat to these anteaters, but have a rougher time bringing them down than the more skillful Deinognathids. Large viverrids are also predators of these animals, and quite successful at killing and eating even the largest species.
Below is a rough-sketch I did of Formiciarctos, which is different in appearance than any other of the anteaters. As you can see, the name ant-bear fits them, as they are somewhat bear-like in general appearance. All other anteaters more or less resemble their modern counterparts. But Formiciarctos has a much heavier head to accommodate the crushing apparatus in it's mouth. 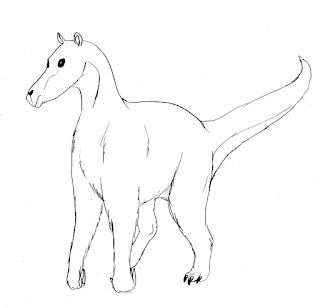 Posted by Dee TimmyHutchFan at 12:19 PM