Browsing Squirrels: The Family of the Week

This week's group to discuss is the high-browsing squirrels, family: Sivasciuridae. We are familiar with the concept that there were once huge rodents. These high-browsers are no exception. They are built like heavy-set giraffes. Or like a cross between a giraffe and an elephant. They lost most traces of their distant relatives' characteristics, which happen to be squirrels. But felt the need to grow bigger to browse the leaves in the tree tops. And they did grow!! The largest of these squirrels is 40-feet tall. They are among some of the largest rodents of the Metazoic. The smallest of them is 25-feet tall, which is still quite large.

Like modern giraffes, they have prehensile lips and a long tongue to reach for the leaves with, in addition to their long neck. The tail is relatively short, and when running is held over the back of the animal. The tail is thick and well-haired. They are not fast runners, but can effectively defend themselves with their heavy front legs, equipped with sharp claws on the inside toes. The neck is long, but not slender like we see in giraffes. The head is more camel-like than squirrel-like. The front legs are longer and more powerful than the rear legs. The body is relatively short and muscular. The ears are small and round, like those of a tapir, and move independantly. No species in this family has a grasping trunk like we see in elephants. The lips are plenty graspable enough. The incisors are very large, almost creating a rough-edged beak inside the front of the mouth. They live alone, not much need to live in very large herds. They are only really social in the breeding season. Bulls spar with each other for the favors of the cows using the sharp claws on their feet. Other than that, they are only social with herds of other herbivores, like antelope. Often one of these huge squirrels will be seen in a herd of antelope or deer acting as a lookout for the smaller animals that cannot seem to see above the grass-level. The eyesight of these squirrels is very good, and the hearing is superb. The sense of smell however, is not that desirable. But the hearing makes up for it. They can pick up on a leaf falling from several hundred yards away. When startled, these squirrels can race off at a top speed of 25 mph. Not very fast, but few predators will actually tackle them.

The worst enemies of these squirrels are the largest Deinognathids and mongooses. Sometimes other large carnivorous mammals, like Tyrannopithecus, will bring them down. Most predatory mammals though will not even try to bring down an adult. The calves however, can also be taken by large, predatory bats and large foxes.

**********EDIT TO ADD**************
I have decided to include a picture for this family. Here is one I made this afternoon and scanned. The first depiction is just a sample of what one of these squirrels would look like. The second pic below is an individual battling off a small pack of Asian Tamanoa. Click on the pic to see a full-size view. 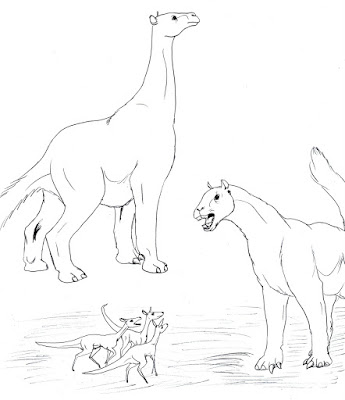 Posted by Dee TimmyHutchFan at 10:46 AM