I don't usually talk about the famous (or to some, infamous) blog Pharyngula, since I try to talk more about the science of paleontology and evolution here, rather than the current political and social battles the scientific theory (which is not the same as one getting drunk one night and coming up with something) is facing in the United States. Not to mention PZ Myers doesn't talk much about speculative biology. But recently, he posted something so good I just had to link to it...vampire math.

Basically, Brian Thomas, a theoretical ecologist, decided to do some calculations to try and calculate the overall population dynamics of vampires in Sunnydale based on a bit of predator-prey dynamics in the wild. Now it must be mentioned that these population calculations were done on the aspect of vampires from the Buffyverse, and so are affected by the in-show continuity (the Hellmouth and such), but we can also use most of this to calculate the ecology of vampires in general. Of course no vampires were used in this study, because they either were not found in the universe that the author existed in, or else it would be really dangerous to fit the little bugger with a radio collar to try and track its movements. So instead, Thomas came up with the following equation... 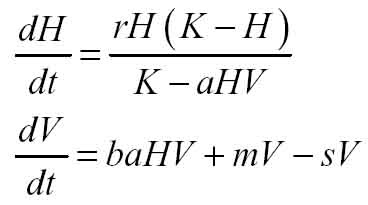 Where in this equation
r = is the intrinsic growth rate of the human population, incorporating natural rates of both birth and death as well as immigration
K = is the human carrying capacity of the habitat in question
a = is a coefficient that relates the number of human-vampire encounters to the number of actual feedings
b = is the proportion of feedings in which the vampire sires the victim (i.e.- this is the vampire birth rate)
m =is the net rate of vampire migration into Sunnydale
s =is the rate at which the Scoobies stake vampires (assumed to be the only important source of vampire deaths).

When we try and plot this data, three different stable equilibria. The first is where the humans become extinct and the vampires, depending on humans for food, die out with them. The second is where the rate of staking is faster than the rate a vampire can sire victims, and so the vampires are extinct and the population of humans is near carrying capacity (the maximum amount of humans the environment can sustain). The third, however, is the interesting one. Setting the two equations equal to each other to find an equilibria, we find that in an average mid-sized California town like Sunndale that the equilibrium population will be about 36,346 humans, and for that many humans there will be an equilibrium of about 18 vampires. In a shocking case of irony, the actual population of Sunnydale within the show is barely a thousand or two a way from this, at about 38,500.

But, as anyone who has watched a single episode of Buffy the Vampire Slayer will know, there are more than eighteen vampires in Sunnydale. A lot more. Therefore, some other factors must be at work in order to account for an unnaturally large population of vampires in a small area, such as...

There are also some other isses that, while speculative, must also be addressed because they affect the way the vampire population grows in several ways. These include...

For those who wish to read the study in its entirety, it can be found here (http://www.hphomeview.com/Tips/Vampire%20Ecology%20in%20the%20Jossverse.pdf). Perhaps someday I will post my own ideas on vampire evolution and ecology, but for now enjoy this facinating thought experiment via a fusion of math and ecology!

Posted by Metalraptor at 7:28 AM