Well, this was a cool article I found, it talks about a fossil found that may be one of the earliest direct links to the evolution of monkeys. Well, everyone by now should know how fascinated I am by primates, so this article really hits home with me. It caught my attention right away, anyway. My apologies to my readers for not being on here much, I'm planning something with my supervisor that should be very big in getting the word out for UMG Productions! So, I've had a busy week planning and plotting with her.
http://dsc.discovery.com/news/2009/05/19/skeleton-primates.html
Skeleton Sheds Light on Primate Evolution
Malcolm Ritter, Associated Press 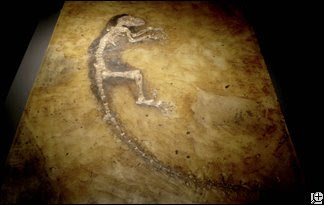 May 19, 2009 -- The nearly complete skeleton of a small 47 million-year-old creature found in Germany was displayed Tuesday by scientists who said it would help illuminate the early evolution of monkeys, apes and humans.
About the size of a small cat, the animal has four legs and a long tail. It's not a direct ancestor of monkeys and humans, but it provides a good indication of what such an ancestor may have looked like, researchers said at a news conference.
Because the skeleton is so remarkably complete, scientists believe it will provide a window into primate evolution. The animal was a juvenile female that scientists believe died at about 9 or 10 months.
"She tells so many stories. We have just started the research on this fabulous specimen," said Jorn Hurum, of the University of Oslo Natural History Museum, one of the scientists reporting the find.
The creature is nicknamed Ida after Hurum's 6-year-old daughter.
The unveiling, at New York's Museum of Natural History, was promoted by a press release for the cable TV show History, which called it a "revolutionary scientific find that will change everything."
Mayor Michael Bloomberg, among the speakers at the news conference, called it an "astonishing breakthrough."
The story of the fossil find will be shown on History, which is owned by A&E Television Networks. A book also will be published.
Hurum saw nothing wrong with the heavy publicity which preceded the research's publication Tuesday in the scientific journal PLOS (Public Library of Science) One.
"That's part of getting science out to the public, to get attention. I don't think that's so wrong," Hurum said.
Posted by Dee TimmyHutchFan at 1:45 AM

There is some indication, however, that what we may be seeing is just another adapid (proto-lemur esque creature). The real question is the matter of the publicity surrounding the fossil. Will we be doing this with all new taxa? Even ones that don't do a lot of shedding light on evolutionary history?

I think part of the reason this is catching so much publicity is because we as humans are so fascinated by where we originally came from. Just a guess there.