Though the age is dominated by mammals, there are some wonderful and fascinating reptiles and amphibians that inhabit areas where mammals are either not very prominent, or are all over absent, such as some very remote islands, or high mountain tops. These places are where the reptiles and amphibians take over the ecological niches. This page will show you some examples of reptiles that, in some cases, take the place of mammals.

Omadastelio, or "Pack monitor", is a rather large monitor lizard that inhabits islands off the coast of Australia, known as the Pecaus Islands. There are no large mammals, though there are some smaller rodents and pteropods. These lizards hunt in packs, like wolves. Their prey consists of large pythons, tortoise, and any unfortunate pteropods that get caught in their path and cannot fly off fast enough. Instead of running after their prey, as seen in wolves, these lizards prefer the stalking method, as seen in lions. They kill their prey by eating them. 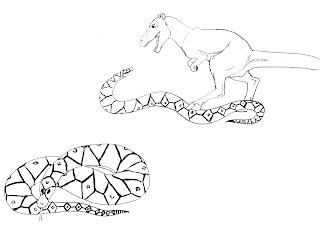 Eunectes adamas, or the "Diamond anaconda" is much larger than their modern counterparts. It is named for the very clear diamond markings on the back. They live in the southern rivers of South America and grow as big as 50-feet long. It is one of the top predators in it's range, feeding on therapeds, alligators, lizards, coursing rats, and many other rather large animals, but they themselves can also fall prey to large mammals like Deinognathus and Tarboailurus, as seen in the above picture of a Deinognathus wrestling a diamond anaconda. In this case, the Deinognathus usually wins. But the anaconda it's self is a miraculous hunter, preferring to stalk it's prey at the water's edge, then kill by constriction. Just like modern anacondas. 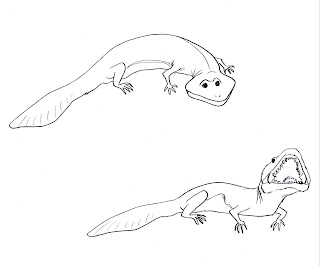 Diamacephalus is a very large amphibian, related to salamanders. They can grow to a length of about 11 feet long. The head is very large and diamond-shaped and the teeth are quite sharp for grasping prey. These amphibians inhabit what is today the Columbia River in the northwestern USA and feed on a wide variety of mammals, birds, fish and insects that they can capture. They hunt like crocodiles of today, lying in wait on the river bank and quickly lunging to land to grab the nearest animal to them as it takes a drink from the river. The head muscles are very large and powerful and quickly they can drag their prey into the water to be consumed. They also scavenge at times. But unlike crocs, these amphibians work alone and do not like the company of their own kind outside the breeding season. 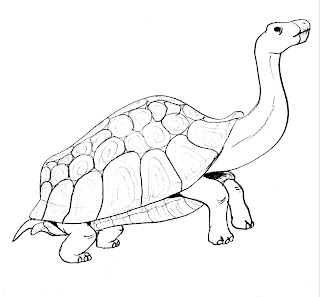 Gantichelys is a Metazoic version of the modern giant tortoise. Only these tortoise can grow to a height of about 10 feet. They live in the dry, remote valleys of the Chilean Andes, which is one of the driest places on Earth. These tortoise can easily make a meal of lichens that grow along the ground and that is their year-round food supply. They never need to drink, they get all their moisture from the lichens. Few predators live in these dry, remote regions, only Deinognathus, which can easily make a meal of this tortoise, obtaining most of the water it needs from it's prey. Like all tortoise, Gantichelys are loners. 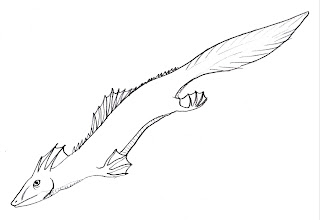 Cetiguana is a rather large, fully oceanic lizard descended from the modern marine iguana. They can reach full lengths of about 10-feet long. The hands and feet are large and webbed, the tail has become a large, flat, oar-shaped apparatus to propel the lizard through the water. The sail on the head and back are more for display than anything else. These lizards inhabit the waters off the coast of northern South and Central America. They rarely come to land, only to lay eggs in the sand. They feed mostly on sea grass, sea weed and algae. But these lizards themselves can fall prey to sharks, seals and Oceictis. 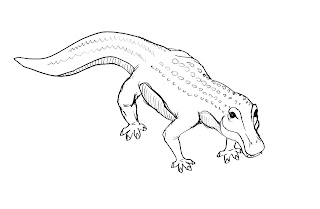 Lenitosuchus is a large herbivorous crocodile that inhabits the Pecaus Islands off the Australian coast. Unlike other crocs, this animal is a full-time herbivore. The teeth in the front are sharp for tearing off chunks of grass, leaves from small trees or bushes, or for slicing fruits or breaking open the husks of some fruits. The teeth in the rear are peg-like for crushing the matter to be eaten. They do not have molars, but they do still possess a gizzard for grinding the food. These animals still take to water for protection. Their main predators are large pythons and the pack monitor. Though the front teeth can also be used for protection, they usually prefer to run away from danger, and swim to the deepest part of a lake. In consequence, they are pretty fast swimmers compared to other crocodiles.

Platypython is a huge python found in southeastern USA, in what is now Florida and Georgia. The head is very python-like, but most of the body is flat, especially the tail. The tail has become an oar-shaped appendage that helps the snake swim through the swampy waters of the southeast. The snake uses the muscular neck and chest for squeezing prey to death. They feed on any mammals and reptiles they can capture, though this area has few mammals. They themselves may fall prey to larger crocs, and large deinognathids. 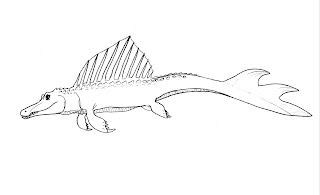 Pinnatosuchus is the Metazoic's own sea-going crocodile. Unlike the modern salt-water crocodile, this animal is a full-time swimmer. It lives in the warm waters of the Nile Channel between the coast of eastern Africa and western Lemuria and Madagascar, as well as the Atlantic between Africa and North America. The long sail on the back is to help regulate body temperature, rather than being used for swimming. The tail is flat with a sort of flat fin-like structure toward the end of the tail. The feet are fully-developed flippers. This animal, unlike modern crocs, gives birth to live young. The young stay with the mother until they are big enough to fend for themselves. They feed on fish, cephalopods, sinecrus, oceanic lemurs like Rhynchocebus and Chamenius, and sea monkeys. But they themselves can fall prey to giant sea genets (Haliophonia) and very large sharks.

Got an idea for more? Leave a comment. We appreciate your ideas.


Greetings! I know this is somewhat off topic but I was wondering if you knew where I could get a captcha plugin for my comment form? I'm using the same blog platform as yours and I'm having problems finding one? Thanks a lot! capital one login


Everything posted made a ton of sense. But, what about this? what if you composed a catchier title? I mean, I don't want to tell you how to run your blog, but what if you added a post title that makes people desire more? I mean %BLOG_TITLE% is kinda boring. You could look at Yahoo's front page and see how they create post headlines to grab people interested. You might try adding a video or a pic or two to grab people excited about everything've got to say. Just my opinion, it could make your posts a little livelier. hotmail sign in email

Blogger supplies the captcha feature. In your settings, you can set it up so that commenters have to use a captcha to continue.