Usually alternate speculative biology isn't my thing. But after typing up last night's article, I thought about our aquatic lineage. I found myself doodling a bit last night and I came up with a creature as never before seen, but would have been what we'd look like today. There are some features I left out, and some I did to extremes. Most aquatic mammals are more intelligent, that could be what shaped our own intelligence. Probably how we got these big brains that science says we should never have evolved. It's true! However, I decided to keep the ape-like head features. I thought through a process of alternate evolution based on the presence of the semi-aquatic species Oreopithecus in our background. What if we had continued down that evolutionary road? Or if Oreopithecus had survived all this time, and certain individuals had continued down that road, leaving us, Homo sapiens, to inhabit the land. It could have happened. It happened in the evolution of whales. Not all individuals of the proto-species Indohyus stayed in the water. Surely some individuals evolved a land-based existence and became deer and pigs. Some deer are still semi-aquatic, and pigs like to roll around in mud, and the closely-related hippos (same lineage) are amphibius. But whales, the other descendants of Indohyus, are fully aquatic. So what if the same split happened to Oreopithecus, and both results are around today? That is what came to mind last night.
While one split of Oreopithecus was evolving on land to become us, Homo sapiens, the other split was evolving in the oceans. All fully-aquatic animals have short legs, so we lost our legs and instead grew seal-like flippers. The tail is gone, and won't come back. Our heads grew longer so we can stick our noses out of water to breathe without lifting our heads out, making us vulnerable to any land-based predators. Our hands are fully webbed. We no longer have any hair on our bodies, not even on the head or eyebrows, as they are not needed in the water. We lost sweat-glands. And the fat that accumulates in our body is put to good use. We even give birth in the water and our babies do not take their first breath until we break the sac at the surface. But the baby can still get a supply of oxygen through the umbilical cord until the mother breaks it off. We have nostrils that open and close as needed to keep water out. We have lobes on our ears that close tight to keep water out. We feed on fish and marine vegetation and can be pretty fast swimmers. Faster than any Olympic swimming champion! We are still about 5 feet long from the tip of the snout to the tip of the hind flippers.
I even thought of a name for this aquatic hominoid. I called it Thalanthropus aquaticus. Which means literally "Aquatic man of the ocean". And this is what the creature looks like: 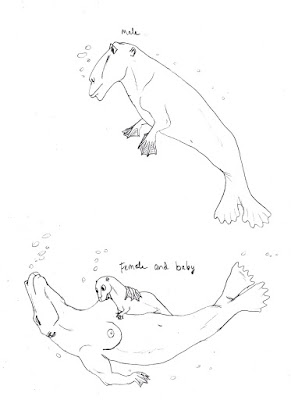 Posted by Dee TimmyHutchFan at 10:35 AM

The bottom one looks good, but the snout on the upper one looks a little odd.

Anyway, it would be interesting to see what we would evolve into if we ever survive and manage to save enough planet for everyone, so to speak. I mean, we are tropical primates who haven't diverged much from the basic arboreal primate structure, except for a few heat-loss related adaptations. And while genetic change would be slow, due to modern technology, it still would happen, just taking 10 MY rather than just 2.