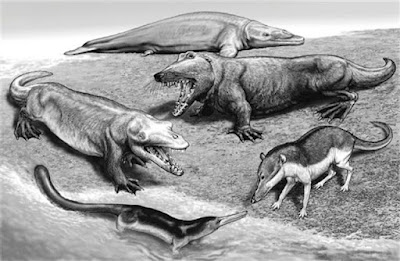 Personally, I love whales. They are one of my most favorite mammal families. So, I thought I would discuss the evolution of these very fascinating creatures. Whales once roamed the land, in fact their earliest relatives are very closely related to deer and pigs. I guess that explains why such animals as hippos closely resemble whales. The first whale was a raccoon-sized creature recently discovered in India, that somewhat resembled a cross between a dog and a deer, called Indohyus. It was also one of the earliest relatives of even-toed ungulates. As you can see, it had hooves, like deer. But the rest of it's anatomy is much like that of a small dog. 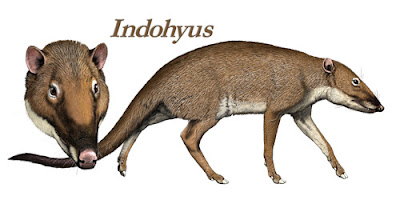 That was the earliest whale. Though we do not necessarily think of this when we hear the word whale. The skeletal structure was actually heavier than the structure of most mammals it's size, which allowed these animals to lead a somewhat semi-aquatic lifestyle. The heavy bones allowed these animals to remain submerged without floating to the surface of the water and was probably a defensive mechanism, or helped them find underwater food. 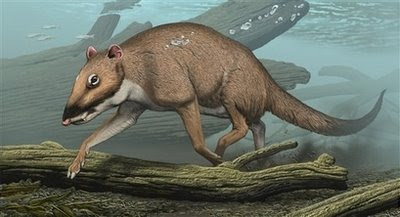 This animal was around some 50 million years ago, and basically crawled along the base of rivers and lakes. Another animal, slightly younger than Indohyus, was Pakicetus. It was a slightly more aquatic animal with very close-set eyes. The hooves of this animal had almost disappeared to become more like the feet seen in shrews.

It is also a lot more squat in structure. It also had a streamlined head. This was the next step in whale evolution. After this animal evolved, it went a step further to become an amphibius animal known as Ambulocetus. This was a rather large semi-aquatic animal, whose lifestyle was similar actually to crocodiles. It inhabited lakes, but took a lot of it's food from the land. Occasionally, they would travel on land as well to find other hunting grounds.

These animals were carnivorous, relying less on vegetation for food, it caught it's prey by stealth. In fact, at first all whales were killers. Ambulocetus was a rather slow swimmer, more like sea otters than like modern whales or dolphins. After Ambulocetus was an almost fully aquatic creature known as Rodhocetus. Though it was much more aquatic than Ambulocetus, it still retreated to land. Why is anybody's guess. Probably to bask in the sun or to supplement their diet with small land animals. It was believed, like Ambulocetus, to swim in a rather otter-like fashion. It is however, much more whale-like than it's earlier predecessors. 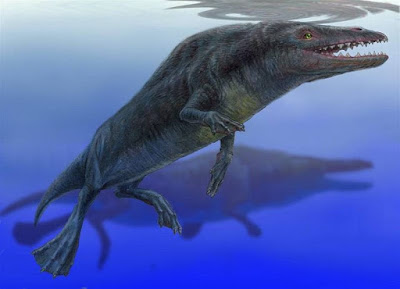 About 30 million years ago or so, these animals lost their legs and became another very whale-like animal known as Basilosaurus. Basilosaurus was a huge, serpentine whale that inhabited the ancient Tethys sea. Often, these animals still swam up to estuaries to hunt bathing animals. They were scary-looking, with a head much life a shark with crushing jaws and sharp teeth. 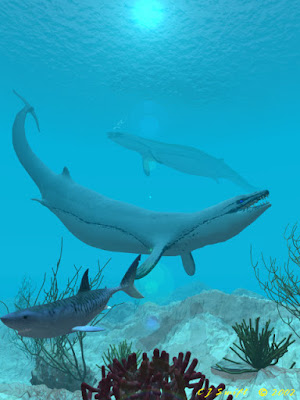 This animal was first thought to be a giant lizard, but further studies have pinpointed it as the closest relatives to dolphins. As you can see, they still have remnants of their back legs, but they are greatly reduced and almost useless for all but to steady the females for mating. No modern whale has this, although a bottlenose dolphin, who was a freak of nature was spotted in 2006 that still had hind flippers similar to these. But it was just one animal with some kind of genetic mutation. Indeed embryonic dolphins still have the rear flippers, but these disappear later on in their development.

Posted by Dee TimmyHutchFan at 12:47 AM

And I finished my review of whale evolution in anti-creationist article on my site! It was difficult to translate from English, but I did it!!! I think whales are a perfect example of the predictional ability of evolutionism.