If I could bring any animal(s) back from extinction, which one(s) would I bring? Well, I'd love to have all the Hawaiian Honeycreepers come back. I'd love to see them. They evolved from finches millions of years ago that somehow wandered to the Hawaiian Islands. Even today, many of them are beautiful!! Some look a little like hummingbirds or sunbirds, most look like finches. 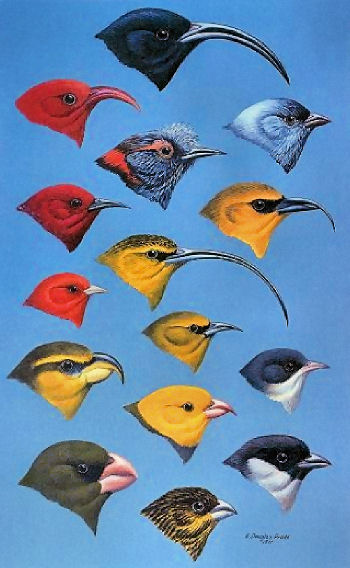 Many species of honeycreepers went extinct over the past 2000 years, since the Polynesians introduced the polynesian rat. Rats often eat bird eggs for protein, and this species found it easy to prey on the eggs and nestlings of these birds. But that isn't all, mongooses, cats, sheep, goats, and several other introduced species have been actively wiping the native birds of Hawaii out. The most recent extinction within this family came in 1998, that year, at least 3 species were pronounced or assumed extinct. I think I still have a picture of one of them somewhere, the O-u (Psittirostra psittacea), it was often called the "parrot-bill". But it hasn't been seen since the late 90s. It's really sad, that was a species that relied totally on a certain tree for food, and sheep and goats that were introduced to Hawaii in the 18th century, were eating the young trees. Over the course of 2000 years, 20 species of Hawaiian Honeycreepers have become extinct. That's one species every 200 years!!


Well, that's just one family I'd like to see brought back from extinction. I think also it would be cool to see a live T. rex. Probably eat me up, but at least I could die happy having seen a sight no other human has ever seen, a live tyrannosaur!! And hey, it's better to go by way of animal predation than to be snuffed out by a madman's bullet!!! *wink* hehe!

In fact, I'd love to see any dinosaur be brought back to life today. It's really a shame the dinosaurs went extinct. Most of today's predators SUCK compared to them. I mean, seeing a lion or tiger would be nowhere near as exciting as seeing a tyrannosaur!!! Or even a velociraptor!

Now, raptors are figured to have had feathers, like birds. This is cool, I think. It proves there is a possibility these animals did in fact survive the extinction event that killed off the other dinosaurs. They just don't look like this anymore. As dangerous as it may be to be in the same room with one of these, I'd love to see one.

Those are the animals I would love to bring back from extinction.
Posted by Dee TimmyHutchFan at 12:16 PM